It might not have been springtime, but Paris in late autumn is still beautiful. I was invited there to participate in an international conference on the quality of work. Unbeknown to me, my session had been informally labeled by one of our hosts as ‘Bob Dylan vs The Beatles’. The focus was interventions to improve job quality. Bob Dylan was Paul Osterman from MIT. If they were drawing on a Beatle analogy, I was hoping our hosts thought of me as John Lennon and not Paul McCartney: more working class hero than singing frog. The billing though reflects more than our differing US and UK origins; Paul Osterman and I have competing opinions about how to fix job quality and make it better.

END_OF_DOCUMENT_TOKEN_TO_BE_REPLACED 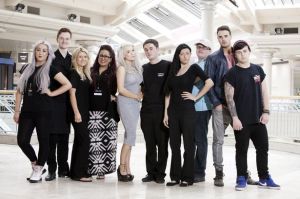 It has become something of an orthodoxy on both sides of the Atlantic that job quality is polarising into good and bad jobs. A lot of attention in the US and UK is focused on making these bad jobs better. It is less well appreciated that good jobs can go bad and that bad jobs can get even worse. It might be that aesthetic labour contributes to the latter.

Much of the initial research into aesthetic labour has analysed retail jobs. Employment in retail constitutes what might be termed a ‘bad job’. Most jobs in retail are low skill and retail is one of the main low wage industries in the US and UK.

It seems that this bad job is getting worse however as retail companies seek to aestheticise their workforce, hiring employees who look good or sound right. Two developments have emerged as a consequence of this aestheticisation strategy by employers.

END_OF_DOCUMENT_TOKEN_TO_BE_REPLACED

If it’s springtime in Paris, it has to be if not sex then at least summer in the city – New York City. Luckily the American Sociological Association held its annual conference in Manhattan this August. The theme was ‘Interrogating Inquality’. Playing to this theme Ashley Mears of Boston University had organised a panel session on the sociology of appearance.

Along with my colleague Dennis Nickson, I’d been asked to present on the ‘dark side’ of aesthetic labour – ‘lookism’. Lookism is discrimination on the grounds of appearance. Or as Ayto bluntly states, ‘uglies are done down and beautiful people get all the breaks’. According to Tietje and Cresap, the term was first used in print by the Washington Post in the late 1970s. For us the issue is inequalities in access to employment based on prescribed and proscribed looks. I finished reading through my presentation notes as my plane touched down in Newark. As it taxied to the apron, I found myself wondering, Carry Bradshaw style, if the uglies are being put down, who or what decides who is good looking or at least has the right look?

END_OF_DOCUMENT_TOKEN_TO_BE_REPLACED

You shouldn’t keep a good tattoo hidden – unless that is if you’re a company worried about scaring your customers. Air New Zealand is one such company. It has refused to hire a job applicant because she had a visible traditional Maori tattoo; Maoris of course being the first people of what became New Zealand. The applicant, Claire Nathan thought the company ‘would be quite proud to have someone with a ta moko working and representing New Zealand’. Instead the company stated that  ‘We want all of our customers to feel comfortable and happy when travelling on our services and this has been a key driver of our grooming standard which, like many other international airlines, prevents customer facing staff from having visible tattoos.’

END_OF_DOCUMENT_TOKEN_TO_BE_REPLACED

This month I completed what the Australians call a ‘FIFO’ – a fly in, fly out visit to London. I was there to participate in a review of the ESRC-funded research centre SKOPE, based at Oxford University. The visit coincided with the funeral in London of former British Prime Minister Margaret Thatcher. Reading through the UK press obituaries, I think that a fair summary of Thatcher political life was that while she loved Britain, she loathed the British. It’s interesting that if, as many of the right-wing commentators claimed, she changed Britain for the better, her offspring now live in the US and South Africa and also flew in for the occasion.

END_OF_DOCUMENT_TOKEN_TO_BE_REPLACED

From America to Australia, the new, third season of the TV series Downton Abbey has started. Even in an age of opulence, life is sometimes not easy for a well-heeled family. In the first episode, Downton Abbey’s new footman is proving difficult. Not only does he not know the difference between silver service and butler service but he is too tall for the job and does not fit his uniform. His height therefore is a problem because wearing these uniforms is one of the many important signifiers of the family’s wealth and status.

As Cynthia Cockburn has pointed out, the physicality of jobs can be constructed to fit only certain bodes; in her study of the printing industry, male bodies. In this industry, tools and equipment were designed to suit male bodies, acting to disadvantage women. Apparently, workwear too can be designed to fit only certain bodies. Because the uniforms, or livery, of domestic staff can be expensive, in order to cut costs and recycle, uniforms would be bought that fit average size bodies. To wear them and be able to work, footmen therefore need to be of average height and build, as William Hanson explained in the Huffington Post. Even today at Buckingham Palace footmen are typically of average height – 5’ 8’’ – for this reason, Hanson continued.

The height of the Downton Abbey footman made me start thinking about the loci of aesthetic labour, or more prosaically: where is it found? Aesthetic labour centres on how interactive service organisations seek to create a style of service encounter that affects customers’ senses. Most research as focused on workers looks, though increasingly research is turning to how workers sound. Encapsulating theses senses, along with my colleague Dennis Nickson, I’ve suggested that aesthetic labour is most obviously manifest in dress, comportment and speech. The issue though is whether it is a purely private sector initiative, as employers seek to gain competitive advantage, or can be found in other sectors, such as the public and not-for-profit sectors. END_OF_DOCUMENT_TOKEN_TO_BE_REPLACED

The University of Washington in St Louis has just hosted a colloquium on invisible labour. It was organised by Winnie Poser and her colleagues at the Center for Interdisciplinary Study of Work and Social Capital. Two key questions informed the meeting: what counts as work, and why are some workers invisible? The starting point for the debate was the many forms of labour that are hidden from public view.

The keynote was provided by Arlie Hochschild who discussed her recent book The Outsourced Self. Everything including intimacy can now be bought on the market she explained – we can hire trainers to teach us to be the CEO of our love life, wedding planners, parenting surrogates and people to choose our babies names for example. All of our lives’ activities, not just our labour are now being commodified and sub-contracted to others. We need to reveal and research this development she said.  END_OF_DOCUMENT_TOKEN_TO_BE_REPLACED

This work is licensed under a Creative Commons Attribution-NonCommercial-ShareAlike 3.0 United States License.
Work in Progress
Create a free website or blog at WordPress.com.