Now that 55 million U.S. children are back in school, parents, teachers and school administration have been gearing up for the rest of school year ahead. However, one group of individuals who are often overlooked in our cultural imaginations of schools are the lunch ladies (also referred to as school food service employees). More importantly, this group of workers are poorly misunderstood and are often not considered at all. Not only are lunch ladies invisible in academic research, but they are invisible in our national conversation about the quality of school food.

It is important to draw our attention to the work of food service employees so that we may have a better understanding of how they impact children’s health. Although overlooked in considerations of children’s health, lunch ladies do have an impact on children’s lives each day.

When we do see portrayals of lunch ladies in popular culture, they are often portrayed as one-dimensional. This undermines our ability to consider lunch ladies as partners in improving children’s school meals. Based on a media content analysis, I have found that lunch ladies are more often than not portrayed as villains. END_OF_DOCUMENT_TOKEN_TO_BE_REPLACED

Lately, I’ve become convinced that those of us who study work organizations have kind of missed the boat. Which boat? I suppose that vessel can best be described as popular culture. Let me explain.

I teach social theory pretty often, and if you do that, you more or less have to come to grips with the relation between power, culture, and social inequality. With me so far?

So. When I put on my sociology of work hat, and read through our various efforts to understand the working out of power, I find it hard not to feel as if this field is culturally deprived. Oh sure, there’s a slew of studies focusing on organizational culture (whatever that means). But very, very little that asks where and how workers acquire the images of work and authority  which they bring with them into their work situations.

It’s as if we’ve missed the “cultural turn” entirely, abandoning the whole field of popular culture to the cultural studies types (most of whom wouldn’t know honest employment if they fell over it). 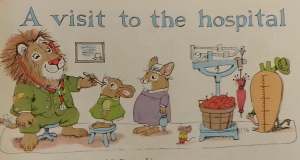 Kidding there! But I am serious when I opine that we need to pay much closer attention to media, television, movies, advertising, magazines, and children’s literature.

Which brings me to the odd-looking image shown above. One of my department’s graduate students gave me as a Christmas present Richard Scarry’s book, What Do People Do all Day? A classic kid’s book, it uses animals to represent the division of labor that exists in Busytown. On a lark (so to speak), I googled the book, and eventually came up with a brilliant piece of analysis by John Levi Martin (see his 2000 article, “What Do Animals Do All Day?” in Poetics). To oversimplify greatly: Martin constructs a sophisticated empirical analysis of nearly 300 children’s books, and finds that there is a marked tendency for these texts to represent certain animals in particular kinds of jobs. Jobs that allow the occupant to exercise authority over others tend to be held by predatory animals (especially foxes), but never by “lower” animals (mice or pigs). Pigs in particular are substantially overrepresented in  subordinate jobs (those with low skill and no authority), where their overweight bodies and (judging from the plots of these books) congenital stupidity seems to “naturally” equip them for subservient jobs. Here, see this additional image from Scarry’s book, showing construction work being performed by the above-mentioned swine.

In effect, Martin’s point is that there is a hidden language or code inscribed in children’s books, which teaches kids to view inequalities within the division of labor as a “natural” fact of life –that is, as a reflection of the inherent characteristics of the workers themselves.  Young readers learn (without realizing it, of course) that some species-beings are simply better equipped to hold manual or service jobs, while other creatures ought to be professionals. Once this code is acquired by pre-school children, he suggests, it becomes exceedingly difficult to unlearn.

Levi Martin’s paper reminds me of the important 1997 paper in ASR by Bernice Pescosolido and her colleagues, who studied the portrayal of blacks in children’s books (and found some very interesting patterns, involving the “symbolic annihilation” of African Americans in this literary genre). So it seems reasonable to ask: Why don’t we have more such studies in the sociology of work and social inequalities? In answering the question, “How do people learn to labor?” (the play on Paul Willis’s classic title is fully intended), haven’t we focused too narrowly on the workplace itself, to the neglect of earlier stages of life or extra-organizational life (e.g., popular culture) as such?

To be sure, there is a small handful of studies that have examined how work is represented in popular culture –but reviewing this literature doesn’t take much time. Beth Montemurro has written an interesting analysis of how sexual harassment is transformed into the substance of comedy on television (see her 2003 article, “Not a Laughing Matter,” in Sex Roles).

Kelly Massoni has a smart analysis called “Modeling Work: Occupational Messages in Seventeen Magazine” that appeared in Gender and Society, in 2004. The latter piece argues that the skewed occupational images presented to teenage girls generate highly distorted occupational aspirations, ill-equipping them to navigate the world of paid employment. But these studies are really the exception, with the larger patten a pronounced silence in this field. And there is virtually nothing that traces the “reception” of cultural objects by those who listen to, read, or watch them.

Which leads me to suggest that it’s time for us to think anew about work organizations. In a culture such as ours, which provides few if any outlets for discussion about the nature of work, maybe there’s a reason why “The Office,” and “Dilbert” are so popular. Or why some of the best and most engaging television shows –“The West Wing,” “House,” and even “The Wire” –are at their heart dramatizations of workplace life. The only puzzling thing is why we sociologists of work have largely neglected this point.