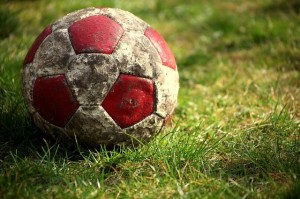 He makes the very strong case that women athletes in the U.S. are held to a different standard than men.  The evidence?  Female soccer players on the UNDEFEATED 2015 U.S. World Cup team are accused of “sloppy, uncreative play” (despite outscoring opponents by a wide margin), having “unsatisfying wins,” and some players are even apologizing for some victories, saying that their play will improve.  The coach has even been defensive in response to recent victories.

In contrast, Futterman goes on to point out, soccer players in last year’s men’s U.S. World Cup team won one game (against Ghana), tied a game (against Portugal), and lost to Germany and Belgium yet were hailed as the “spunky underdogs storming the gates of the soccer establishment” and widely celebrated upon their return home.  I’m not able to find record of ANY member of the men’s national team apologizing for their 2014 World Cup performance. The double standard, some argue, is because we have heightened expectations for women to win—and win big—and expect less of the men.  The women recently won two World Cup titles (in 1991 and 1999) and at the start of World Cup play were ranked second in the world by FIFA. The men have qualified for every World Cup since 1990 but have never won a title.