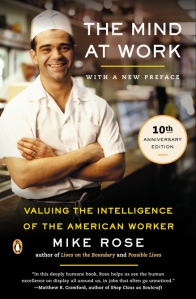 If that venerable debunker of inflated language, George Orwell, were alive today, he would gleefully be ripping into the lingo of the “new economy,” particularly taking aim at the gaseous hyperbole associated with digital technology.

To be sure, the last half-century has been a time of significant changes in the organization and technologies of work, and these changes have had huge consequences for workers. But the typical depictions of those changes misrepresent the complex nature of work and the workers who do it. The standard story line—found in political speech, opinion pages, and countless popular books on the new economy—is familiar to the readers of this blog.

The story begins with a historical divide between the new economy we live in and the old economy of heavy manufacturing and traditional services—the first of many simplified binaries. The new economy gives rise to new kinds of work—knowledge work, symbolic analysis—and a new kind of highly educated worker. Those workers in front-line jobs also need to be smarter, possessing both hard skills (computer literacy, problem solving ability, specialized knowledge) and soft skills (flexibility, curiosity, ability to communicate). These are 21st century skills for a 21st century economy, neck up work versus the neck down labor of an old economy built on brawn, repetition, and control. Consider this not atypical summary from an award-winning management book, “Whereas organizations operating in the Industrial Age required a contribution of employees’ hands alone, in the Information Age intellect and passion—mind and heart—are also essential.” Workers didn’t think before 1980.

The dark revelation in this story is that we lack sufficient workers for these new jobs; there is a skills mismatch between the smart workers we need versus the old economy workers we inherit or the undereducated young people coming out of school.

The smart corporation is structured (or is restructuring itself) so that it maximizes the skills of these 21st century workers, both at the high levels of product innovation and creativity and on the front line of production, drawing on their skills to improve quality and efficiency. The new corporation is flexible, nimble, and lean, its leaders vigilant to cut costs through consolidation, sub-contracting, and outsourcing – and to respond quickly to changes in market demand.

As with any grand narrative, there are gaps and distortions in this one. It is unclear, for example, how many new economy companies actually draw on a broad array of their workers’ skills, or, for all the talk about the demand for 21st century workers, the highest job growth has been in low-wage, low-tech areas: restaurant servers, nursing home aids, retail salespersons. There are also a host of challenges to the skills mismatch theory: industries have stripped away in-house training that once developed necessary skills; or overstate the skills requirements for particular jobs; or, simply, won’t pay an adequate wage for the skilled workers who are available.

What is telling is that in most renderings of this narrative you won’t hear from workers themselves, particularly the old economy folk. They are present only as an abstraction, and certainly had no hand in crafting or amending the story. So questionable features of the story—such as the characterization of old economy work as mindless—go pretty much unchallenged in mainstream accounts of the new economy.

One of the things that most concerns me about this story is that, as in a morality tale, there are the damned and redeemed, the deficient and the virtuous. Old economy workers, unless they can be retrained and up-skilled, are the problem, as are younger workers coming in the door without the requisite hard and soft skills. These workers are not only the losers in their own economic lives, they also collectively weaken our national position in the monumental contest of the global economy.

Consider, in contrast, the portrayal of those working in high-tech, not the factory workers—certainly not them—but the small slice of engineers, designers, and programmers. They are teased for their geekiness and occasionally chided for their insularity, but, by and large, are depicted as exceedingly smart, hard-working, entrepreneurial (all true) and as the youthful embodiment of an innovative and prosperous future, filled with technological wonders. Here is where the language glides off the rails. Consider this opening to a special report on tech startups in the January 18, 2014 Economist:

About 540 million years ago something happened on planet earth: life forms began to multiply, leading to what is known as the “Cambrian explosion.” Until then sponges and other simple creatures had the planet largely to themselves, but within a few million years the animal kingdom became much more varied.

This special report will argue that something similar is now happening in the virtual realm: an entrepreneurial explosion.

I get it. The author is trying to convey the combinatorial power of the elements in our tech ecosystem. But do we really have to look back 540 million years to find a fitting analogue for a Stanford or MIT graduate using open source devices and services to create another social networking app? Where is Orwell?

Fortunately, there is growing criticism of both the tech enterprise itself and of the hype surrounding it—and the Economist feature, in the midst of its celebration, acknowledges these liabilities: the 90% failure rate for startups, the adolescent culture and gender imbalance, the questionable societal value of many of high-tech’s products and services.

What I don’t hear much in the criticism of high-tech—nor in the more careful treatments of the nature of the current economy—is the issue I mentioned a moment ago: the way the average worker gets represented in our society’s narratives about work in our time. I’ve been writing a new preface for my study of the thinking involved in blue collar and service occupations, The Mind at Work, and simultaneously I’ve been reading story after story about our society’s best and brightest going into finance or tech, about “entrepreneurship,” “innovation,” and “disruption,” about the smart machine and the workerless workplace, and about the astounding amounts of money that fuel these developments. What strikes me is the degree to which the average worker—typically the “old economy” worker—comes across either directly or by implication as not smart enough, not disciplined enough, not skilled enough, not young enough, and, simply, not cool enough.

The way a society talks and writes about work matters. The new economy discourse contains many truths about transformations in the workplace, but its simplifications and excesses contribute to the diminishment of entire categories of workers, providing a rhetorical backdrop for flattened salaries and two-tier pay scales, for the cutting of hours and benefits, for inequality. In mainstream tales of the new economy, these workers do not represent promise, tomorrow’s cutting edge. The are sub-par and need fixing–and are to blame for the bad deal they’re getting

Mike Rose is on the faculty of the UCLA Graduate School of Education and Information Studies and the author of The Mind at Work: Valuing the Intelligence of the American Worker, newly released in a Tenth Anniversary Edition.