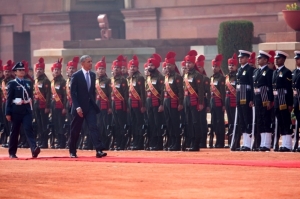 Photo via The White House

Excitement about India’s role as a rising power was again highlighted by Barack Obama’s state visit to New Delhi in January. Indian Prime Minister Narenda Modi has also made a series of high-profile international visits since his election victory last year. But, as I originally blogged at Progress in Political Economy in February, the reality of work and life in the new India is radically different to the sparkle of Modi’s globe-trotting.

This contrast has been highlighted by many writers (including my colleague, Dr Elizabeth Hill – see her review of Rina Agarwala’s important new book on informal labor in India) and is something I take up in my new book, Informal Labour in Urban India: Three Cities, Three Journeys. The last quarter century of rapid economic growth in India has been underpinned by the mass employment of ‘informal labor’. The book uses case studies of economic development in three urban regions of India: Mumbai, Bengaluru (Bangalore) and the National Capital Region (NCR) of Delhi. I wrote this book after undertaking seven years’ research on India’s informal economy, including my doctoral research with the Department of Political Economy at the University of Sydney. When I first considered undertaking a PhD, I was interested in the impacts of trade and investment between India and Australia on labor markets. I quickly discovered what, for me, was a far more interesting story about India’s transition from a relatively inward-looking, low-growth economy to a globally-integrated, high-growth economy and the impact on employment and livelihoods.

But what does ‘informal labor’ mean? There is a massive Global South-oriented literature on this question. Many economists and mainstream development agencies, influenced by different shades of neoliberalism, argue that informal workers have made a rational choice to work outside the regulatory shadow of the state due to excessive bureaucracy, ‘red tape’ and taxation. Traversing the writing of alternative thinkers, my book clarifies that this is a narrow and misleading presentation of informal labor. As well as the absence and evasion of state regulation, informal labor also represents a categorisation of socio-economic disadvantage and a historical and spatial process that reconfigures the balance between different types of work and employment. I take a ‘classes of labor’ approach, reconstructing the problem through the combined theoretical lens of Marxist and institutional political economy.

I try to do this in two ways. First, different types of work and employment are framed as different ‘forms of exploitation’, a phrase borrowed from Jairus Banaji. Forms of exploitation are the myriad types of work, occupations and labor process organisation in which economic surplus is transferred from the labor of workers to different forms of capital. Each case of informal labor represents a specific form of exploitation; a different way for capital to lower production costs, control workers and increase enterprise flexibility. This leads into the controversial bit of my argument: I argue that the informalisation of Indian labor markets since the mid-1980s, a period of neoliberal globalisation, has been marked by a shift towards the employment of wage labor. This argument runs counter to the views of several prominent South Asia scholars who, instead, claim there has been a shift towards self-employment and ‘petty commodity production’.

I use a combination of field research in the Delhi region and analysis of government data collected during the 1990s and 2000s for Delhi, Bengaluru and Mumbai to demonstrate my case. While most of this shift has occurred within small ‘informal enterprises’ (firms that employ fewer than 10 people), it has also coincided with the rapid emergence of large-scale enterprises in some regions—huge factories and offices, like the garments factories of Bengaluru or state-of-the-art automotive manufacturing in Delhi’s satellite cities, Gurgaon and Faridabad. Work and life for many workers in these factories is not so different from that of workers in informal enterprises—by and large, most represent different types of informal labor.

This leads into my second conceptual argument. Much of this new industry has been driven by private investment through India’s integration with the world economy. I frame this as a process of ‘uneven and combined development’ to try to explain why new industries have emerged in some regions while traditional industries have either declined or, in the case of export garments in Bengaluru or the NCR, been transformed through a mix of the ‘old’ and ‘new’. Mumbai represents a classic case of deindustrialisation, with the decimation of its textile mills in the 1980s and the mass relocation of large-scale enterprises from the old island city to the outskirts of the city—Navi Mumbai—and beyond to new industries centres that fringe the city of Pune, 150 km to the southeast. In contrast, Bengaluru, India’s third most populous city, has seen rising investment in IT, call centres and manufacturing. The NCR, in contrast, has elements of both industrial decline and renewal. While Delhi’s industries have been ‘hollowed out’ through relocation and slum clearances, massive new investment has occurred in the city of Gurgaon, 30 km to the southwest, including the gigantic operations of Japanese carmakers and global financial institutions.

While uneven and combined development has reproduced amazing diversity in Indian cities, the common link between them is the expansion of informal labor. While some of these jobs offer higher wages for rural migrant workers, informal jobs mostly represent low-paid, precarious employment with very little access to social protection or voice in the workplace. Why has informal employment expanded so much in the context of neoliberal globalisation? In addition to India’s reengagement with the global economy, the answer is related to problems in India’s agrarian economy, the historical role of the state in planning and development and class conflict in the 1970s and 80s. But you’d need to get hold of the book to get the full story which, I hope, is relevant for students and scholars of development as well as those interested in India’s future prospects.

Tom Barnes is a postdoctoral research fellow at the newly-formed Institute for Religion, Politics and Society at the Australian Catholic University.