For the first time in its history, the City Council in my hometown of Austin, Texas is run by a female majority. This important milestone should be cause for celebration. Instead, Austin was embroiled in controversy when it was revealed that the city manager’s office had brought in experts to help staffers “cope” with this new reality.

Consultants from Florida provided a two-hour training session to explain how new approaches would be needed to present issues before the council now that women are in charge. Staffers were told that men and women do not process information in the same way. Nor do they care about the same things: men are interested in the financial bottom line, while women want to know how various issues impact the community, families, and children. Women also ask a lot more questions than men do, and take more time reaching a decision.

The staffers at the event (most of whom were women) were encouraged to adopt a gender-appropriate repertoire as soon as possible because more women political leaders are inevitable, thanks to the inspiration of Hillary Clinton.

This egregious stereotyping of women leaders led to a barrage of embarrassing press coverage. Consequently, the City Manager suspended the person responsible for arranging the training session.

END_OF_DOCUMENT_TOKEN_TO_BE_REPLACED

Bad jobs are usually defined as those with low pay, little autonomy, and few benefits. Add to the list irregular hours. As Steven Greenhouse describes in his New York Times article on the part-time labor force, workers today are suffering from erratic scheduling. In the service industry, employers routinely cut their hours or send them home early when customer traffic slows. On the flipside, workers are required to be on call or stay late during especially busy times. Erratic hours not only mean income insecurity, but also result in the inability to do anything else, like search for a second job or take a class.

END_OF_DOCUMENT_TOKEN_TO_BE_REPLACED

NOTE: I was on my way to Megan Tobias Neely’s dissertation proposal defense when I received Matt’s invitation to respond to this blog post. In a case of pure serendipity, Megan’s dissertation is an ethnographic study of hedge fund managers. I sent Megan the blog post and we recently sat down to discuss it.

CLW: Why did you decide to write your dissertation on hedge fund managers?

MTN: I was taking a course on the financial crisis in the public policy school. A lot of that research focuses on how deregulation and various political interests led to the financial crises. I realized that we can’t understand the crisis unless we understand how the workplace structures the way people make investments, and how, through their daily decisions at work, financial managers shape public policy.

END_OF_DOCUMENT_TOKEN_TO_BE_REPLACED

Both men and women experience job discrimination when occupations are closely associated with either masculinity or femininity.  In my research on “men who do women’s work,” I found that men are often excluded from occupations that involve close contact with children due to stereotypes about male sexuality and suspicions of pedophilia.  Homophobia is often at the core of these damaging and destructive stereotypes.

Partially because of these stereotypes, men constitute only 2-3 percent of all preschool and kindergarten teachers.  However, those who remain in the occupation seem to do pretty well.  Data on median weekly earnings indicate that men out-earn women in this occupation by a sizeable amount—more than $700 compared to women’s $600.  (However, note that the occupation as a whole is woefully underpaid—no one is exactly thriving in these mostly dead-end jobs!)

So men are both discriminated against AND they earn more money than women.  How can we make sense of this paradox?

END_OF_DOCUMENT_TOKEN_TO_BE_REPLACED 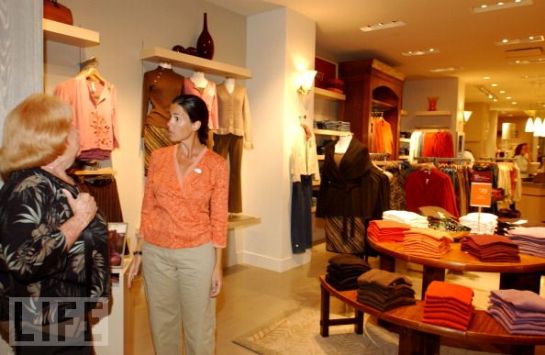 I’ve started to notice more “help wanted” signs in retail stores.  Does this mean that the economy is recovering?  People may be shopping more, and stores may be hiring more.  But retail jobs will never improve this economy unless retail jobs are improved.

In this industry, full-time schedules are rare—most people are hired on a temporary and part-time basis—and pay is slightly more than minimum wage.  These jobs offer neither benefits nor opportunities for advancement.  Although many stores advertise “flexible” schedules, hours are worked only “as needed,” with schedules and hours shifting from one week to the next with little advance warning.  Workers cannot support themselves on the wages from these jobs.