There’s a puzzle around economics. On the one hand, economists have the most policy influence of any group of social scientists. In the United States, for example, economics is the only social science that controls a major branch of government policy (through the Federal Reserve), or has an office in the White House (the Council of Economic Advisers). And though they don’t rank up there with lawyers, economists make a fairly strong showing among prime ministers and presidents, as well.

But as any economist will tell you, that doesn’t mean that policymakers commonly take their advice. There are lots of areas where economists broadly agree, but policymakers don’t seem to care. Economists have wide consensus on the need for carbon taxes, but that doesn’t make them an easier political sell. And on topics where there’s a wider range of economic opinions, like over minimum wages, it seems that every politician can find an economist to tell her exactly what she wants to hear.

So if policymakers don’t take economists’ advice, do they actually matter in public policy? Here, it’s useful to distinguish between two different types of influence: direct and indirect.

END_OF_DOCUMENT_TOKEN_TO_BE_REPLACED

The economist Justin Wolfers, writing for the New York Times Upshot, reports that economists increasingly outnumber other social scientists in mentions in the both the Times and — even more — in the Congressional Record. About 1% of Times stories use the word “economist,” more than three-times as often as they write “sociologist.” Here’s his figure tracking Times references: 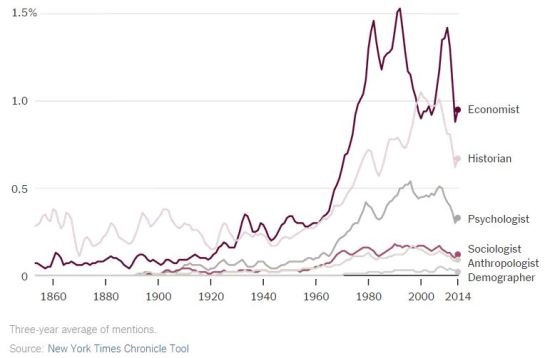 In the Congressional Record the economist-sociologist ratio is 20-to-1. I’ll show some other numbers, but first a little setup.