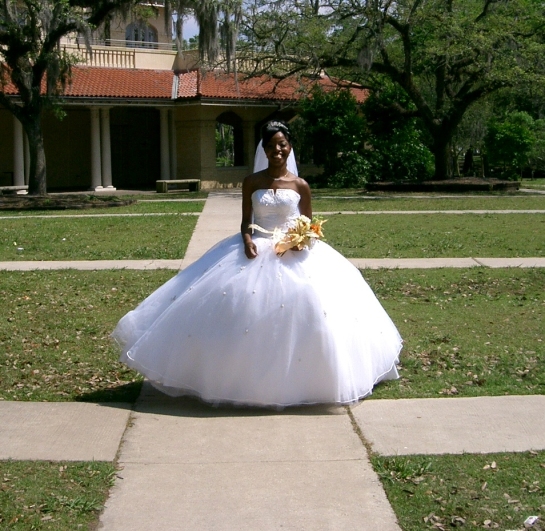 Women choosing bridal gowns (with the help of friends or stylists, even) probably isn’t new per se, but what does seem new, however, is the multitude of people who expend a not insignificant amount of labor creating the modern bride. And what’s worse, we can now watch it all unfold in television.

Thanks to TLC’s “Say Yes to the Dress” (which, if I’m going to write this post, I have to shamefully admit I’ve seen), reality television now documents the relationship between bridal consultants and their clients. And the show is priceless advertising for the upscale bridal boutique in Manhattan where this all takes place–a laboratory of aesthetic bridal labor where consultants help clients who come seeking, in one young bride-to-be’s words, “something I’ve never seen before.”

Consultants rifle through literally thousands of dresses to find the thing she’s never seen before. This process often involves a harsh aesthetic judgement on behalf of the consultants when, for example, he or she has to tell a client a dress is simply unflattering (never mind it’s what she’s “dreamed of”). The goal is to be a better looking version of yourself (if only for one day) and this requires the help of “bridal experts.” It’s not really about the marriage, after all. It’s about the 30-second walk down the aisle where the consultants’ labor takes center stage.

This bride as better looking version of herself is a highly marketable (and profitable) commodity, of course.  According to the the Association of Wedding Professionals,in 2008 the wedding industry was worth about 86 billion dollars. (This, of course, refers to a swath of different sectors above and beyond simply dresses.)

Perhaps the obvious feminist question, of course, is why there isn’t a comparable show that details the groom’s transformation to a product of this kind of labor. Are suits not as interesting? Maybe (probably).I suspect, though, that it’s less about the dress and more about some cultural notions that suggest a bride’s need to look  a certain way to be worthy of walking down the aisle. These cultural notions are likely explicitly gendered.

Aesthetic labor is the foundation of the modern wedding-as-spectacle, and the bride is the prized commodity produced.

Emily Cummins is a Ph.D. student in the department of Sociology and Anthropology at Northeastern University. Her interests include feminist theory, neoliberalism, labor, and globalization.