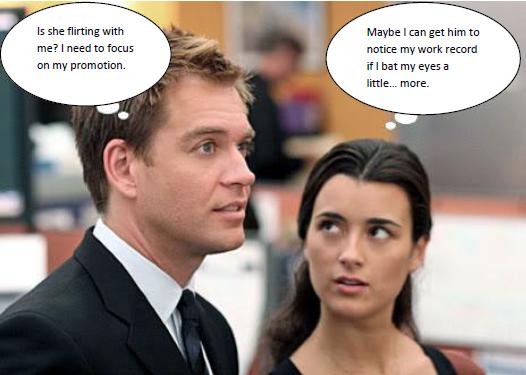 New research by management scholars on workplace flirting is getting quite a bit of media attention.  You might have rolled your eyes at the topic, thinking that nothing serious can be learned about the workplace by studying flirtatious women.

A study of flirting at work may reveal a lot about workplace gender inequality.  In fact, the behavior may be telling of underlying problems that are not “sexual” in content.

First, the study (read a summary of the study here).  The authors surveyed about 300 employed female attorneys in 38 Southeastern U.S. law firms.  Female attorneys reported on, among other things: their strategic flirting (engaging in socio-sexual behaviors with the intent of attaining a desirable outcome); daily mistreatment (the frequency with which they were treated rudely, excluded from a work activity, or as not-smart or inferior); and the femininity or masculinity of their law firm (the extent to which their firm could be characterized by terms such as “assertiveness, forcefulness, and masculinity” versus “compassion, and warmth”).

What can we learn from this study?

Flirting may be a response to real powerlessness women face at work.  A woman may flirt to gain attention in a setting where she perceives herself as being considered “dumb” or excluded.  In other words, the authors may have the causal argument reversed; rather than flirting being a cause of mistreatment, the latter may actually lead to the former.

If this is true, it is not surprising that female attorneys do not engage in a lot of flirting or that women flirt more in settings where they do not see themselves as fitting in socially (i.e., in organizations characterized by masculine traits that either they may lack or may be punished for displaying).  After all, female attorneys occupy relatively high power professional positions and have a lot in common (educational level, training, and job expectations) with their male coworkers.  That is not to say female attorneys do not suffer from a different kind of problem).

If flirting stems from powerlessness at work, flirting may occurs more often among women in low-level positions, positions subordinate to men, and in non-professional settings.  Women in these settings likely encounter high levels of mistreatment (i.e., being excluded, receiving low wages, given little authority, etc.) and few ways to respond to the mistreatment (i.e., they have fewer formal channels to complain, fewer professional networks to turn to for support).

There is somewhat of a Catch-22 here.  If women (regardless of their access to power at work) use sexual strategies to get ahead at work and are punished for doing so, it may only reproduce the very barriers to advancement that encourage them to flirt in the first place.  Take, for example, the successful female executives in the male-dominated finance industry described in sociologist Mary Blair-Loy’s work.  She found that one way some female executives in the finance industry dealt with the social disadvantages they encountered at work (i.e., not being able to acquire male social capital and attract new business or be a “rainmaker”) was by adopting a sexualized self-presentation (e.g., wearing low cut clothing, using a flirtatious tone in conversations with men, etc.).  Blair-Loy concludes that this behavior on part of some women got them noticed (especially by clients) but at the end of the day, it reinforced the boundaries between women and men and served to reproduce men’s power over women.

If flirting and other related behaviors mask real problems that have little to no “sexual” content, a focus on the “sexual” aspect of their behaviors will do little to stop the underlying problems.  As Vicki Schultz has noted with regard to sexual harassment, the corporate obsession with eliminating—or what she calls sanitizing—any sexual conduct at work has encouraged employers to treat sexual harassment as a problem of bad men who offend women as opposed to a sign of larger patterns of sex segregation and inequality.  She goes on to say that this means companies can “feel good about punishing individual employees for sexual offenses while doing little or nothing to address the overarching dynamics of harassment and discrimination that preserve gender hierarchy at work.”  This feel good strategy seems accurate.  My own work has revealed that companies are more likely to have formal policies banning sexual harassment at work than they are to have, for example, programs that teach employers about the root causes of sex segregation or ways to avoid gender bias in promotion decisions.

An interesting next step would be to see the extent to which powerless men at work (i.e., those in dead end jobs) engage in behaviors to get ahead at work.  Since men do not gain much by flirting with women at work because their female coworkers tend to be subordinates and cannot help them get ahead, behaviors to study among them include cheating, stealing, or lying.

This work is licensed under a Creative Commons Attribution-NonCommercial-ShareAlike 3.0 United States License.
4 comments