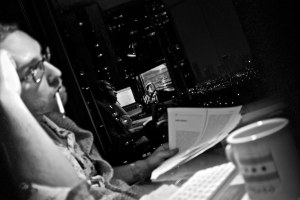 by Kenneth Wee and Karla Erickson

“The paradox of education is precisely this – that as one begins to become conscious one begins to examine the society in which he is being educated.”

In 2011, a Pew Research Center report found that nearly half the American public considered teaching students job-relevant skills and knowledge to be the defining purpose of a four-year college education. While a good three quarters (74%) of college students walk away from their alma mater feeling like they have grown intellectually and personally, only 39% considered that the central aim of their education. As more and more fresh undergraduates regret not gaining more work experience while in school, overwhelmingly major in STEM fields and business, and identify “getting a better job” as a main reason for attending college, the strings that tie education to employment have only tightened.

Ironically enough, the ancient philosopher Plato might offer us the best take on neoliberal education yet: “education is teaching our children to desire the right things.”

Curiously, it was really only after World War II, when breakthroughs in manufacturing technology and expanding global markets brought demand for skilled labor, that American universities and colleges started explicitly seeing education through the lens of occupation. Larger universities like the University of California at Berkeley – whose president Clark Kerr claimed that colleges existed to “produce socially and economically useful knowledge” – set a precedent for smaller colleges by driving industrial research and equipping students with employable skills. As the post-war economy grew and college became the new highway to the American Dream, enrollments across higher education institutions tripled between 1950 and 1970.

Fast forward to the present, however, and the American college’s promise of financial stability rings hollow. Between global economic recessions, educational reforms in emergent economies and credential inflation, an undergraduate degree has become necessary yet insufficient for the American Dream. As the high cost of college inspires more students and their families to view higher education in terms of its expected financial returns, its pedagogical value has become the subject of much speculation.

For many, college is ultimately worth little more than the value of the career it secures.

Little wonder then that the American small liberal arts college has fallen on hard times. Liberal arts colleges once comprised a full quarter of higher educational institutions here; today they teach “at most 2 percent of college students.” In an educational climate where credentials and skills count, more and more liberal arts colleges sell students on specialized tracks, steer them toward marketable electives, and devote entire departments to the art of the job search. Sociologist Steven Vallas observes that American colleges have “moved beyond seeing students as mere ‘customers,’ and now view them as virtual ATMs,” today’s undergraduates unflinchingly return that same evaluative gaze.

While it may seem prudent, treating education as an investment ultimately diminishes its complex value, and suggests that college is only worth the entry fee of a good job. As concerned scholars and citizens, we argue that a good education must involve more than the struggle for employment. Indeed, our residential liberal arts colleges offer a different yet crucial understanding of what it means to be learned, one that involves holistic learning in leading robust civic lives beyond the workplace.

Small and tight-knit, the residential liberal arts college provides safe spaces for the riskier habits of sociopolitical engagement. Large universities often breed a stoic tolerance for bureaucracy – or the savvy needed to game it – yet small liberal arts colleges are designed for dialogue and discussion across these hierarchies. Take the self-governance ethos of Grinnell College or Haverford’s Honor Code, for instance. Students and faculty in these colleges stay deeply involved in campus conversations and wield considerable influence over administrative decisions, despite the market pressures that increasingly burden them. When colleges encourage critical civic engagement and respond with real change, students develop habits of political involvement and an awareness of what it truly means to live in community.

A politically involved citizen is a worldly one, and liberal arts students acquire a range of perspectives that they would rarely encounter within strictly specialized majors.

While undergraduates often avoid exploring unfamiliar disciplines for fear of sacrificing their GPAs, liberal arts colleges open up useful spaces for beneficial mistakes and intellectual exploration through unconventional assessment standards and recognition of less profitable fields. For example, Oberlin College’s Experimental College (ExCo) offers courses from contemporary issues in education to Taiko drumming, includes local community members as teachers and participants, and allows students to apply and synthesize new knowledge wherever they wish. By supporting disciplines with lower employment prospects, such colleges recognize the value of vocations such as shop-craft and social work, and reclaim them from the careerism of neoliberal education.

In these ways, liberal arts colleges continue to push the frontiers of a socially conscious higher education. Antioch College’s Cooperative Education Program encourages its students to work with external organizations for a full quarter of their credit hours; Bates College pioneered a groundbreaking twenty-year history of SAT-optional admissions, and Alverno College hands out tailored narrative transcripts rather than letter grades.

Even now, liberal arts colleges all over the country make strong statements against the corporatization of education by withdrawing from ranking systems altogether. In all these cases, colleges choose to develop their students as citizens and thinkers over increasing their employability. Certainly students learn many useful job skills under these programs, but not at the expense of personal development or their ability to bring about social change.

One might argue that it’s much easier to support this project from within the ivory tower. After all, the liberal arts college has supplied the privileged few with cultural capital and intellectual resources since its origins in the twelfth century. Family wealth and income still overwhelmingly determine who goes to college, much less who can afford these selective small institutions.

Still, liberal arts colleges offer early steps toward a generalizable model of education in what sociologist Stanley Aronowitz calls a “post-work” society: one that balances the need to produce against the siren song of hyper-productivity and endless work. Through measures such as a guaranteed basic income, a diversion of military budgets toward services such as education, and progressive taxation, post-work policy opens up unprecedented resources for schools and secures the average citizen a base level of financial security. Under this system, an education beyond job preparation could one day become accessible to most, and open up whole new ways of thinking and acting in the world.

The move toward a post-work vision thus asks that we reimagine the current relationship between learning and earning, education and economics. While the sheer force of global capitalism makes this an unenviable task, states such as Canada, Norway, Brazil, and Denmark have already taken first steps toward a post-work society through various pilot tests and policy initiatives.

Despite its waning popularity, the American liberal arts college and its vision of post-work education might teach us all a thing or two about desire yet. In the face of academic capitalism’s relentless commodification, will we teach our children to take the measure of society, build the worlds they wish for, and think past the tyranny of the present?

Now that would truly be the stuff of dreams.