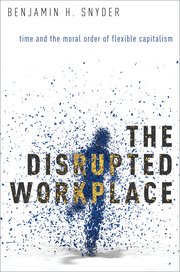 The twenty-first century workplace compels Americans to be more flexible. To embrace change, work with unpredictable schedules, be available 24/7, and take charge of one’s own career. What are the wider implications of these pressures for workers’ lives? How do they conceive of good work and a good life amid such incessant change?

In my recently published book, The Disrupted Workplace, I consider these questions in light of three groups of American workers—financial professionals, truck drivers, and unemployed job seekers. I look at how they construct moral order in a capitalist system that demands flexibility.

Based on seventy in-depth interviews and three years of participant observation, I argue that the flexible economy transforms how workers experience time. New scheduling techniques, employment strategies, and technologies disrupt the flow and trajectory of working life, which makes the workplace a site of perplexing moral dilemmas. Work can feel both liberating and terrorizing, engrossing in the short term but unsustainable in the long term.

The book contributes to conversations about the human costs of flexible and precarious work by examining how both high and low status workers construct moral order within workplaces and careers that are chaotic and shifting.

In addition to working life, The Disrupted Workplace also engages in theoretical debates on time and temporality. Drawing on processual social theorists, such as Henri Lefebvre and Susanne Langer’s work on rhythm, and the sociology of time, including Barbara Adam’s theory of timescapes and Eviatar Zerubavel’s analysis of time maps, I invite scholars of work to think about time from a different angle.

In addition to examining durations of working hours and types of scheduling, as is common in the sociology of work, I highlight the myriad other dimensions of time that have received less attention from sociologists of work, such as tempo, rhythm, timing, sequence, trajectory, articulation, synchronization, and intensity. By developing a rich vocabulary for understanding what time is and how it works, I set out an approach to studying work time that can complement more established approaches.

The core of the book revolves around ethnographic case studies in three field sites. First, I examine the worlds of financial professionals, focusing primarily on a group of debt traders at a powerful Wall Street asset management firm, and incorporating interviews from a broad spectrum of men and women in finance. I show how flexible schedules, which appear to give these workers more choice over when and where they work, often encourage them to work all the time. Moreover, the pace, rhythm, and intensity of their work tasks can make even reasonable working hours feel stressful and overwhelming. At the same time, these temporalities can generate feelings of euphoria and accomplishment by generating enticing “flow” states.

I find that these workers must develop new temporal languages – such as comparing financial deals to the temporalities of military combat – and new cognitive strategies – such as learning how to merge their minds with the rhythms of financial information on a trading screen – that can normalize their abnormal schedules and cope with the simultaneously engrossing and overwhelming nature of financial temporalities.

Next, I look at the truck driving industry, focusing on how deregulation has transformed what was once a stable blue-collar quasi-profession into an economically precarious and physically risky, bad job. Deregulation has been accompanied by a shift toward more insecure employment arrangements for drivers, such as lease contracting, and the rise of new forms of digital surveillance that give drivers less autonomy. Drivers must also cope with an increasingly rigid set of federal regulations on their working hours, which asks them to work in a routine of shifts. I show how drivers learn to manipulate their bodies through a kind of “rhythm expertise” in order to synchronize two antagonistic temporal systems – clock time and freight time.

The final case study involves white-collar job seekers, focusing on a diverse group of professionals, from a group of insurance claims specialists to a television news producer. All had lost their jobs after the 2008 financial collapse due to outsourcing, downsizing, and automation. Many of them have turned to job search support groups to help get their lives back on track. These respondents showed me how workers emplot work events into the larger “time maps” of the life course, and how major economic shocks, so characteristic of life in flexible times, can transform this dimension of work time.

Drawing on theories of projectivity and future making, I show how workers become aware of and construct a response to the implosion of the career model for the life course, one of the central time maps of American work culture. With the help of job search support groups, they develop new time maps that can make sense of long-term insecurity as well as new emotional habits that help them cope with that insecurity by learning to love risk.

Across the three case studies, a common theme of fragmentation and moral dilemma emerged. Despite experiencing remarkably different kinds of flexibility, even the most economically privileged workers in the study lamented that time felt disjointed, staccato, and overwhelming. In almost the same breath, however, respondents also noted that the erratic and unpredictable temporalities of their workplaces can provide a sense of invigorating challenge by pushing them to become more resilient, self-sufficient, and entrepreneurial.

Even those who stood the least to gain from being more flexible noted that the hustle of weaving together the disjointed lines of arrhythmic work tasks, erratic schedules, or unpredictable temporary contracts has its hidden pleasures. In the last analysis, however, respondents from all walks noted that, as enticing as flexibility can sometimes be, it felt unsustainable in the long run. Respondents thus had to balance the short-term seductions of things like speed and entrepreneurialism against the long-term risks of economic insecurity or physical and emotional exhaustion.

The temporalities of flexible capitalism invite these workers into a moral order rife with dilemmas.

Benjamin H. Snyder is Lecturer in the School of Social and Cultural Studies, Victoria University of Wellington, New Zealand. His new book, The Disrupted Workplace: Time and the Moral Order of Flexible Capitalism (Oxford University Press) is out now.