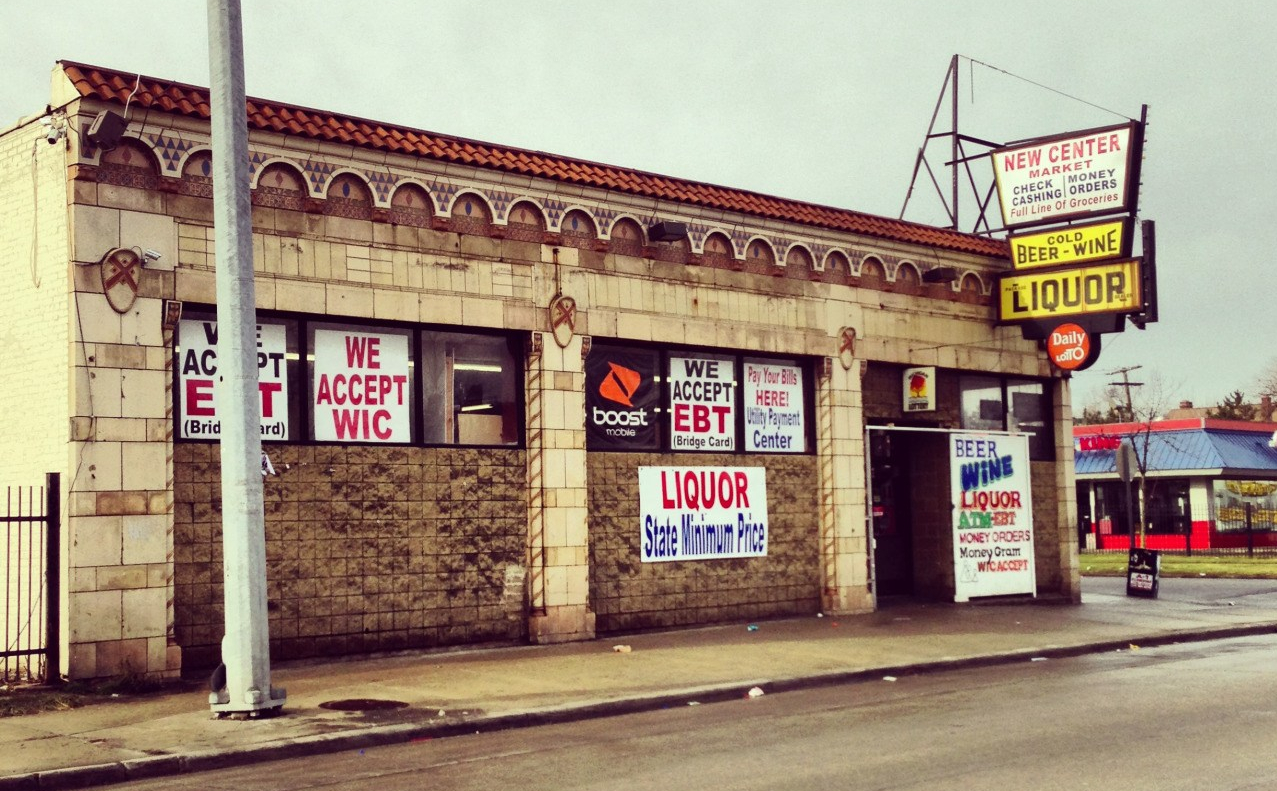 Millions of people live in geographic pockets without access to supermarkets, what many now call food deserts.  These locations lack affordable fresh fruits and vegetables.  Supermarkets incorporating high volumes and high varieties of products have become so central to U.S. food consumption that their very absence has turned into a unique social problem.  It is now nearly impossible for those living in the U.S. to think about food shopping without also thinking about packed aisles and seemingly endless supplies.

The taken for granted characteristics of the supermarket system are central to the process of infrastructural exclusion.

My recent article on the origins of the food desert in Philadelphia points to a process that dates back to the 1930s, developing out of changing relationships between urban development, population settlements, and distribution systems.  The urban grocery decline that became visible as a policy concern by the end of the 1970s was not intentionally produced.  It was neither the direct outcome of strategic political-economic projects nor ideological regimes.  It was the result of gradually changing infrastructural interdependencies that altered market conventions, constrained profitability, generated financial mistakes, and led to repercussions for many urban consumers.

The Great Depression and the growth of the suburbs opened up two new food marketing trends.  The first was the birth of the supermarket, which raised questions for established grocery firms about whether to convert stores to this new organizational format.  The second was the emergence of new economic opportunities in the suburbs during the expanding automotive age.

Grocery chains started out as smaller urban neighborhood markets—there were thousands of outlets in cities across the country.  Shifting to a “suburban supermarket” model was not an instant accomplishment.  Industry executives did not uniformly agree that this market model would guide future consumption trends.

Grocery stores before 1930 were caught up in different mobility and product handling norms.  These early neighborhood chains were only a few hundred square feet and handled bulk staples like sugar, coffee, tea, and flour.  They carried few fresh products—just a handful of sturdier varieties like potatoes and onions that could sit on shelves for longer periods of time.  Even as chain grocers bypassed wholesalers for the procurement of dry goods, the produce wholesale markets in urban downtowns remained vibrant as the primary sellers of fresh fruits and vegetables to street vendors and green grocers.

The rise of the chain “combination store” in the 1930s was the first concerted venture among large national grocery companies like A&P and the American Stores Company—both with a major presence in Philadelphia—into more product varieties.  This conversion to a higher volume market organization with more fruits and vegetables still drew on certain established conventions.  For one, employees continued to select products for customers rather than operating as self-service.

These older and larger companies competed with new entrepreneurs with less costs sunk into previous distribution systems.  These newcomers were willing to try out the profitability of the new supermarket format.  The supermarket started as a giant warehouse market.  In response to the Depression, the supermarket combined experimental methods of handling higher volumes and more varieties.  Store owners controlled most of the variety but they also rented out additional vending space to other proprietors.  They promoted the idea of “cheap food” (and “cheap stuff” more generally) and consumers bought into it.

The expansion of both the “combination store” and the “supermarket” at the same time was one source of industry uncertainty and competition.  But it was not the only one.  Companies also had to decide where to open new stores and distribution warehouses.

This confusion continued even as supermarkets became the more influential format.  Large national chains, along with local and regional firms, shifted full force to the supermarket by the 1950s, converting older stores to this new higher volume and self-service model.  They all continued to open supermarkets in both the suburbs and central cities

Philadelphia was highly segregated by race, as were most major U.S. cities.  The grocery industry had its own distinct history in black urban neighborhoods, in terms of both troubling hiring practices and disconcerting pricing schemes.  Many companies, however, addressed these problems and even became seen as community partners.  They countered common assumptions about the process of retail exclusion and urban decline by building new markets and working alongside local community organizations.

First, A&P was the largest national chain of any type in the 1930s.  It was a powerhouse.  The company had more than 15,000 stores nationwide and defined the era of grocery shopping.  A&P grew to dominance during an age of urban centralization.  In turn, it was very slow to shift to the supermarket format that came to prominence in the suburbs, located at the crossroads of new highways and auto and truck dependencies.  A&P simply fell behind the curve and failed to compete with growing supermarket companies who hit the jackpot by experimenting in less competitive suburban zones and less developed areas of the country, including the south, southwest, and the west.

Second, other companies like Food Fair were ahead of the curve, just as companies like A&P failed to catch up in this competitive low-margin industry. Food Fair executives were early boosters of the supermarket.  They were among the first in the Philadelphia region to make a full swing into that industry.  Their early successes prompted them to quickly convert stores to supermarkets in both cities and suburbs.

Food Fair’s executives wanted to make further gains and saw expanding product volumes and varieties as the most profitable way forward.  Food Fair took the logic of high volumes beyond contemporary limits—a risk other company executives perceived as foolish.  Food Fair sought to combine the discount department store and the supermarket into one market format over a decade before Wal-Mart mastered the “Supercenter.”  Being ahead of the curve was just as problematic as being behind it.  Food Fair executives did not have the skills or technical know-how to handle the different types of supply chains into a profitable endeavor.

In both of these cases, and in many others like them, decision makers made financial mistakes, pushing them behind emerging competitors in this risky industry where profit margins were less than one cent on the dollar.

In the 1970s, the four largest grocery companies in the Philadelphia region were forced to follow the conventions of the period to maintain profits—developing the organizational and technical interdependencies of a regional supermarket system.  Companies closed dozens of stores at a time.  Many of the closures were in the older urban centers and inner-ring suburbs where blocks of older markets existed, and market conversions came with more expensive difficulties: limited space of expansion in the dense built environment, stricter zoning laws, and difficulties of moving high-volume supply chains through crowded streets.

Andrew Deener is an associate professor of sociology at the University of Connecticut.

This post summarizes findings from “The Origins of the Food Desert: Urban Inequality as Infrastructural Exclusion” in Social Forces.