“Since Walmart arrived [In Chile] lunch has been bad. Before, with D&S, they used to give us an appetizer, main dish, and dessert. Now they barely give us a main dish. That’s why we had a job action and now the food has once again improved.” Lorena (Walmart Worker)

To a U.S. audience, it might seem strange that a worker would be complaining about the food they receive in a workplace, especially if that workplace is Walmart. Yet in Chile, large employers like Walmart are required by law to provide workers with lunch or dinner, depending on their shifts. The law however does not specify what kind of meals they have to provide.

Changes to the quality and quantity of food were experienced by workers as a lack of respect. The firm that Walmart bought in 2009, D&S provided higher quality food, and more options. Walmart, in its global quest to reduce costs, tried to offer poorer quality food and less of it, but their strategy backlashed – workers walked out.

END_OF_DOCUMENT_TOKEN_TO_BE_REPLACED

Happy Friday! Since next week is the Thanksgiving holiday here in the U.S., we’ll be on hiatus. See you all in December!

Parents want what is best for their kids. Under what circumstances might that mean giving them Cheetos?

Jane is an upper-middle class mother. Her son, Charlie, is constantly asking her for Cheetos. Jane thinks Cheetos are unhealthy, so she goes out of her way to go to Whole Foods to buy their hydrogenated-oil-free alternative. Charlie doesn’t find them quite as salty and delicious, but Jane feels good about teaching Charlie that his preferences need to be balanced with health considerations.

Across town, Paula, a low-income mother, is facing the same request from her son, James. James also loves Cheetos. Although Paula knows that she is short on the cable bill this month, she also knows that the change in her pocket won’t cover the bill anyway. So she puts that money toward buying James his snack of choice. Paula doesn’t see Cheetos as the healthiest option, but she feels happy about being able to give James exactly what he asked her for.

In many ways, Jane and Paula are alike. They both want their teenage sons to be healthy and happy. They both view feeding their kids as a way of expressing care and being a good mother. But how they feed their kids differs, with Jane’s approach emphasizing self-restraint and Paula’s emphasizing gratification. This discrepancy in approaches is influenced by their access to money and grocery stores; but it is also fundamentally shaped by the class-inflected symbolic meanings that parents like Paula and Jane attach to food.

These symbolic meanings are the focus of my recent study. Through interviews with 160 parents and adolescents and observations of families across socioeconomic status (SES), I found that parents’ different feeding strategies in part reflected the different symbolic meanings that food held for them.

END_OF_DOCUMENT_TOKEN_TO_BE_REPLACED

The interactions between technology and human beings are a source of fascination to many social scientists, from the impact of technology on individual well-being, to power relations in the work place to technology’s transformative potential. Technology has the ability to empower and to deskill, to enhance human capability and to subjugate humans to its requirements.

Science fiction plays on the fear that technology may one day ‘take over’ its human creators. A more immediate concern is that advances in technology lure us into designing and building systems that exceed the capacity of their operators to understand them, especially in the face of unusual, non-routine situations.

Such concerns notwithstanding, humans have succeeded in developing ways to manage and operate very complex, sometimes high-risk technologies with remarkably few mishaps. Such “high reliability organizations” are of great interest to organizational scholars perhaps because they represent a kind of organization-technology frontier in terms of what is possible. Yet scholars of safety science observe that even extremely safe, error-free systems seem to have accident rates, which although very low, are remarkably persistent.

Our recently published study explores some of these issues by examining the interplay between human cognition and system design with reference to the final minutes of Air France flight 447 (AF447), which disappeared over the Atlantic in 2009. Data from the cockpit voice and flight data recorders, retrieved from the ocean floor two years after the crash, revealed a situation in which interactions between pilots and aircraft technology caused an initially relatively benign situation to escalate rapidly into a catastrophe.

END_OF_DOCUMENT_TOKEN_TO_BE_REPLACED 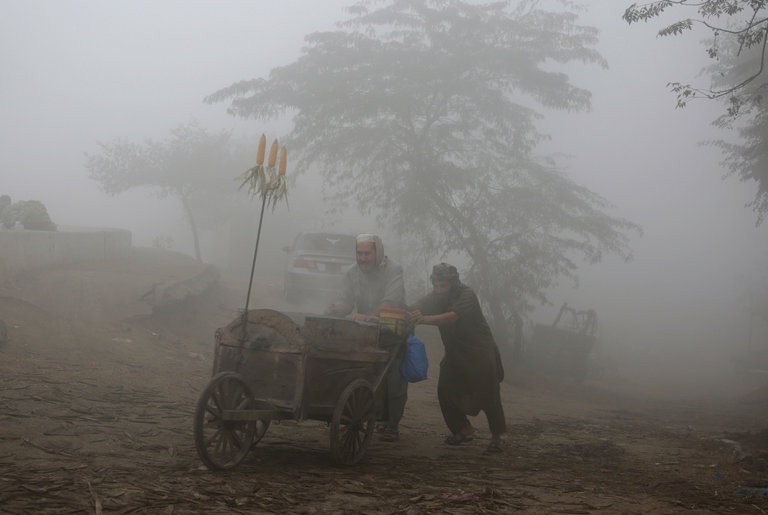 Smog in Lahore, Pakistan (photo via the New York Times)

Happy Friday from WIP! Here is a collection of what we’ve been reading this week.

The world is awash with massive intersectional social problems, from devastating hurricanes and tsunamis driven by climate change to the refugee crisis, racism and the rise of white nationalism.

We have a huge need for widespread social change. And this includes all of us changing the way we live if we’re going to truly address any of these issues.

Yet many of us seem content to simply continue on with our lives. We are either actively trying to maintain the status quo or pursuing our own self-interests. And we are only able to see the world from our own perspectives.

How can we shake up ourselves and our neighbours in our everyday lives in order to get everyone involved in creating social change?

The rock concert for social change

Each autumn, tens of thousands of young people get ready to take part in We Day, a series of rock concerts and speaking events designed to inspire social change. This year, the event takes place in Toronto on Sept. 28, in Vancouver on Oct. 18, Ottawa on Nov. 15 and in many other locations across Canada, the U.S. and the U.K. throughout the school year.

Rock stars like Kelly Clarkson and Hedley will share the stage with celebrity activists like Mia Farrow and world political leaders such as former secretary-general of the United Nations Ban Ki-Moon.

END_OF_DOCUMENT_TOKEN_TO_BE_REPLACED

Happy Friday! Here is our latest compilation of news and essays we’ve been reading.

The UK’s vote for Brexit from the European Union last year was a clear response to the economic impact of free movement of labor on economically-deprived regions of otherwise prosperous countries. By far the clearest predictor of a vote to leave the EU was the lack of a university education and presence in low skill, low productivity sectors of the labor market.

When asked by pollsters, the economic ‘threat’ from low wage EU immigrants was cited by Leavers as a prime reason for their vote. The key questions then, are: why were the labor market issues that gave rise to the leave vote allowed to fester; and why were they linked so strongly to EU membership?

In my recently published study I examine the UK’s skills regime and immigration policies, and suggest that the interaction of these factors produced the economic and political climate responsible for Brexit.

In a nutshell, I argue that the easy availability of cheap, energetic immigrant workers from newer EU members let successive UK governments – and employers – off the hook as regards tackling endemic failures in the UK’s vocational education system. The EU, to a large extent, was the fall-guy for this and bears some responsibility, but we should also look to the organization of the UK’s labor market and skills system.

END_OF_DOCUMENT_TOKEN_TO_BE_REPLACED

America’s poor have plenty of reasons not to love their country.

By most measures, they face bleak prospects and their government offers them the least support of any other advanced country on earth. Their chances of upward mobility are slim, the gap between their earnings and those of richer Americans continues to grow, and they work exceedingly long hours for very little. They have access to very limited social services and support.

It would be very reasonable for Americans to not love their country – to be resentful, rise up, and demand changes to the social contract of the country.

Instead, America’s poor embrace and idealize their country.

Their patriotism runs deep and exceeds in many cases that of the poor in other advanced countries and that of richer Americans. It not only entails a love of country but a belief in its superiority and greatness. America, they feel, is a better nation than most.

END_OF_DOCUMENT_TOKEN_TO_BE_REPLACED

It is Friday once again, which means it is time for our latest collection of the things we’ve been reading and watching this week. Happy Friday!

This work is licensed under a Creative Commons Attribution-NonCommercial-ShareAlike 3.0 United States License.
Work in Progress
Blog at WordPress.com.
Loading Comments...